One week of school down and 39 more to go, but who's counting? Actually it's been pretty nice and easy with the kids in school. They are happy and enjoy every minute. I can't wait until Jacob is back in school either. He is just happier when he is there.

This week was a crazy one. We had moved trees Tuesday through Thursday. On Friday we were in the dump trucks hauling more shredded bark in. Halfway through the day, we got a call saying McKay had a bloody nose and a bloody eye. Being stuck close to Rexburg in the dump truck, I called: a good friend who lived in Rexburg, the doctor, and made it to the school to still have to stop the bloody nose. It turns out (from what the nurse said at my pediatrician's office) that the tear duct is connected to your sinus so as long as it wasn't "gushing" out of the eye and the eye wasn't discolored that she was okay (we also had to watch her the rest of the day.) What had happen was her eye would fill up in the corner and she would actually "cry" blood. I didn't actually see this as it had stopped before I arrived. 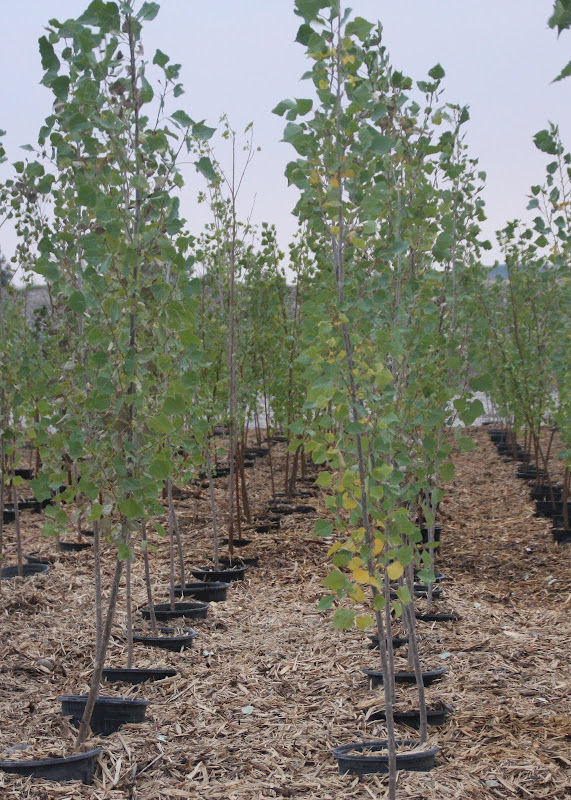 So this is what it looks like after working all day on Saturday. We are only "healing" (covering with bark) in the poplars as we move them for now so it should go a lot faster and quicker in the next week. Hopefully by tomorrow at noon the poplars will be finished. We are on a deadline as Jacob starts school on September 10th and I don't want to be stuck doing this by myself.

There were a few questions in the comments last time that I will try to answer. Back in 2007 we got a permit to remove the topsoil and open a tree farm / nursery. The last two years we have planted over 10,000 trees and shrubs to grow and sale. The pit is the way it is for a couple reasons.

Click for one of the posts from the past on planting.

This is our pit. Some people don't like it, some do.

It's finally flat and ready for the trees and shrubs to be moved up here. So for the next two weeks, this is our project. It should be rather simple. BUT.... 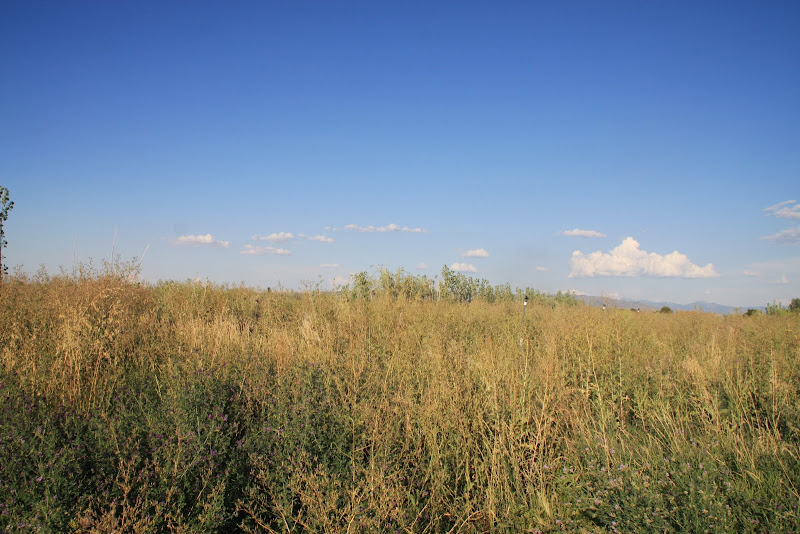 This is where the trees were put last year after they were planted. We had a temporary water system set up and they were supposed to be upfront last fall. Our plans didn't work out that way. One bonus is the weeds kept the plants shaded. 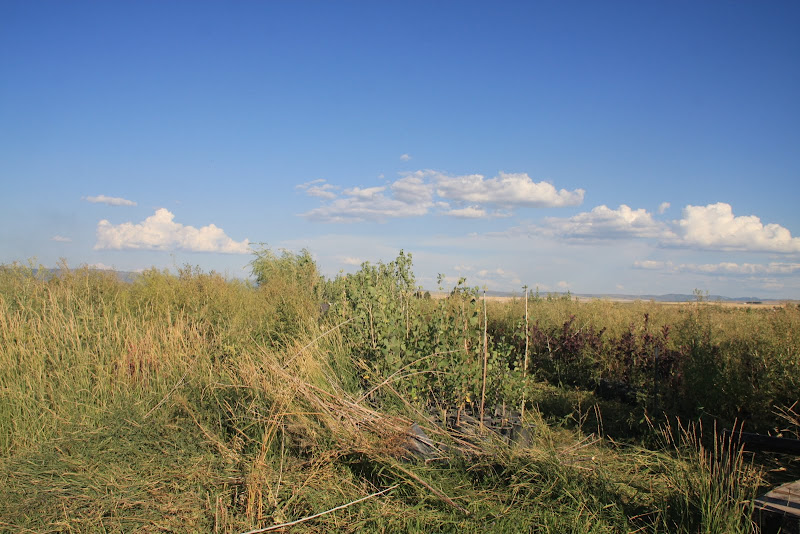 So Jacob and I have been inching our way back little by little. 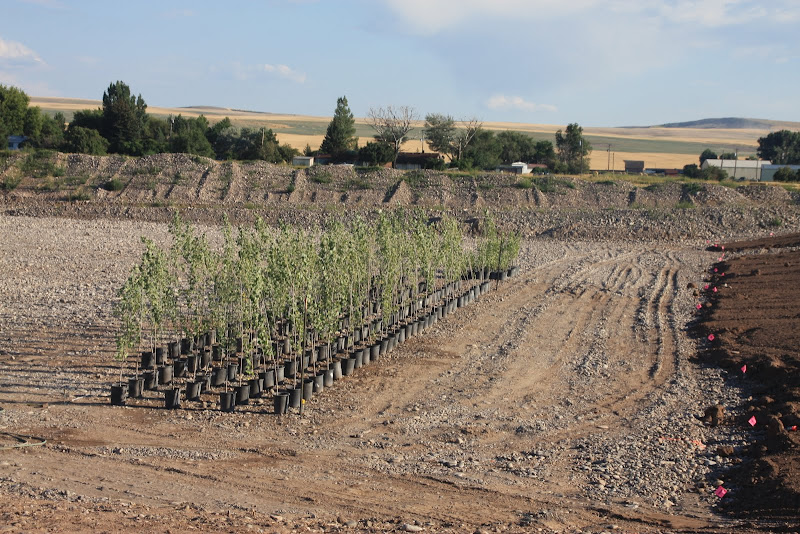 We got roughly 300 moved today. With the poplars, we have to prune them as we go. Hopefully the other trees and shrubs won't take so long. 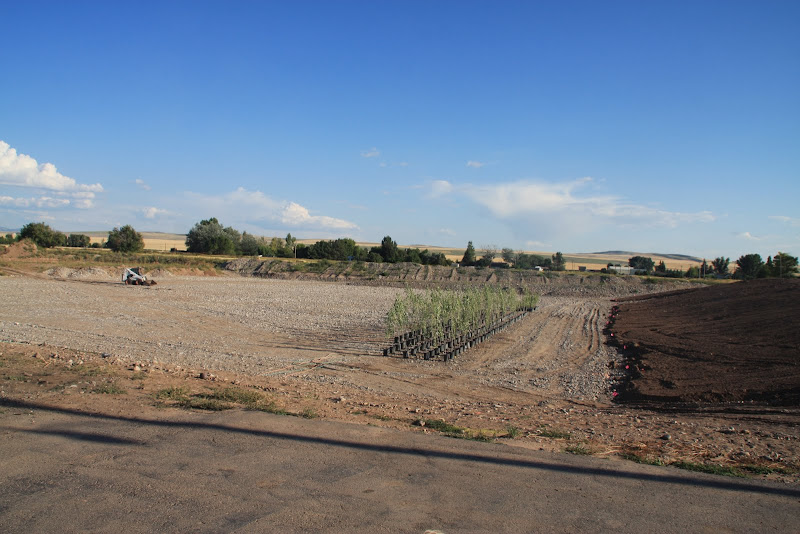 This summer flew by so fast. School started today. It is the last year that McKay and Kirsten will be in the same school together. (sniff sniff) 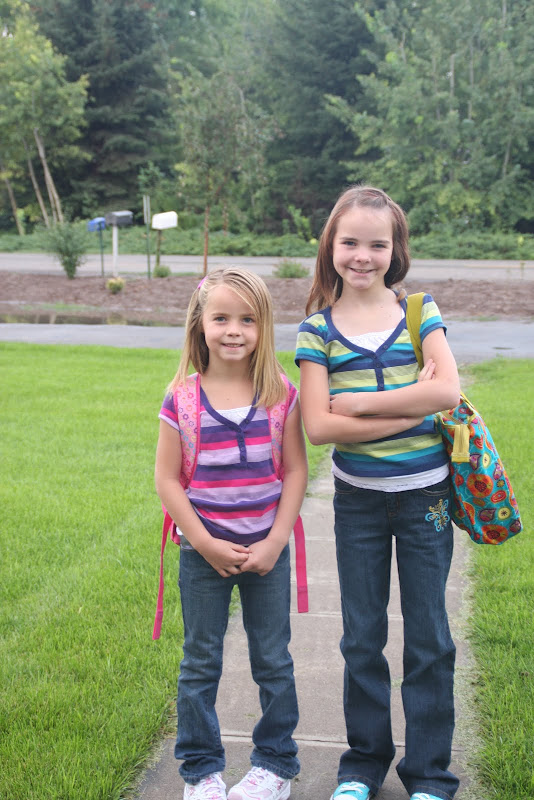 They chose their favorite colors to wear. McKay wanted a pair of Converse this year and after Kirsten saw them last night she wants a pair now too. McKay followed after Aspen's footsteps. 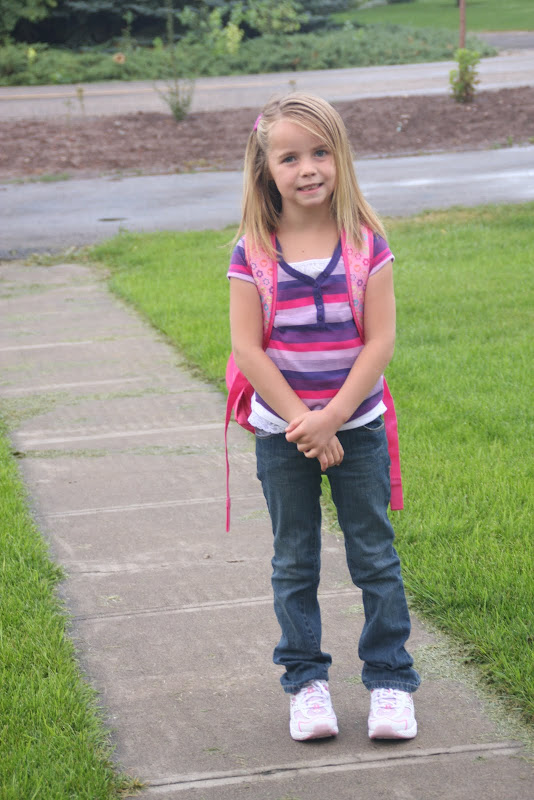 Kirsten is a second grader this year. She has always had a passion for school. She loves pink. She wanted her whole wardrobe pink but that wasn't really possible. After shopping for four hours on Saturday we were finally able to find a pair of shoes (for PE) in her size and that we (her and I) both liked. I started shopping in Texas for school supplies and backpacks but then I got home and things were crazy and busy again. I really should learn not to leave it to the last minute! 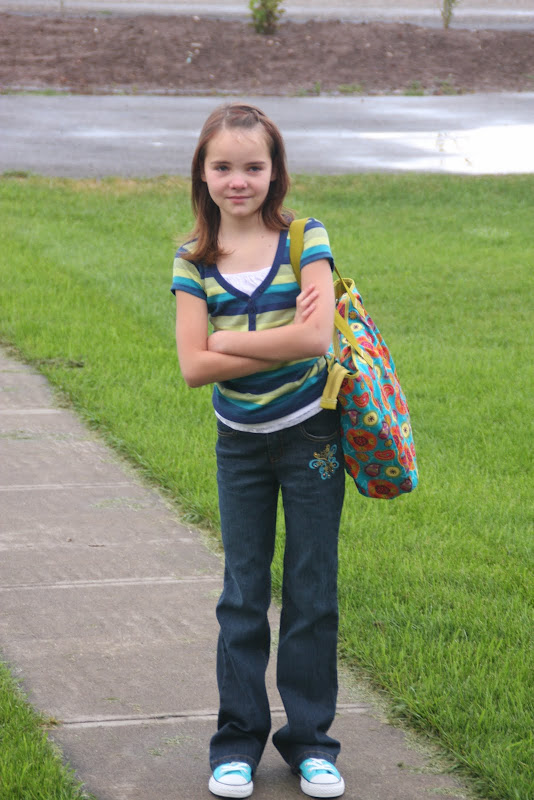 McKay is in the 6th grade. Two years ago our district pulled 6th grade back into the elementary school. I was so happy about this. 10 years old is a little young (even though she is really smart) for Jr. High. McKay loves blue. She didn't want anything pink this year. If she had it her way she would throw everything pink that was in her closet away. McKay never has been a morning person (a little like me) and so her smile is a little off. (Did I mention that after we got them off to school that Jake and I went back to bed ourselves. The other kids were still asleep and it had been raining all day and night so it was too muddy to do the work we needy to outside. We also stayed up too late. We need to evaluate our schedule as well.) 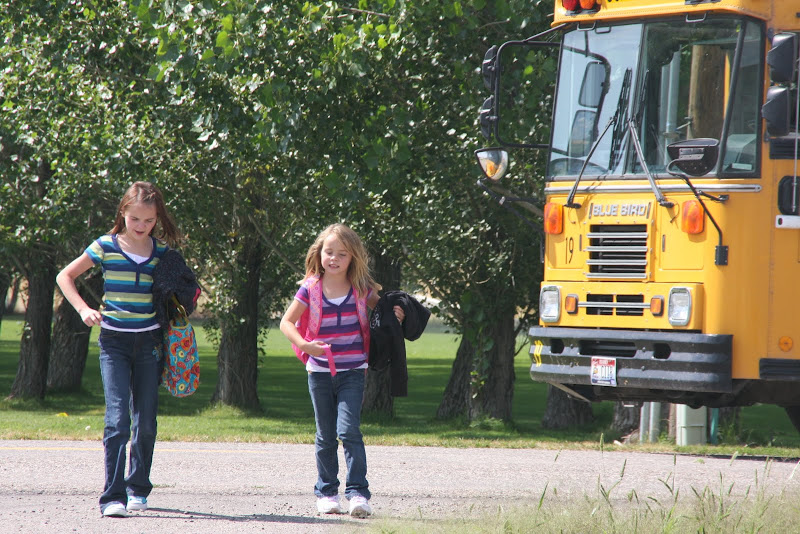 Another bonus about the school is the bus stop is right in front of our house. It couldn't get any better. 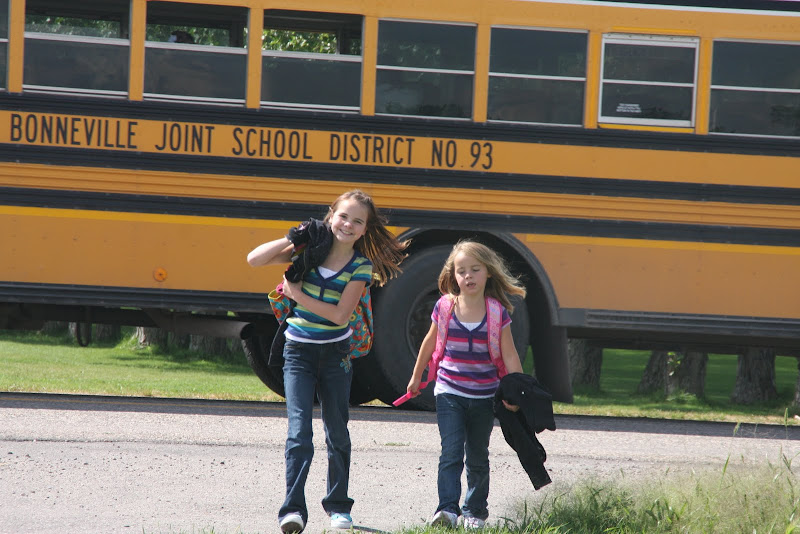 It's good to see that as sister's they can still get along, talk, and be friends. (McKay's smile looks a lot better.) 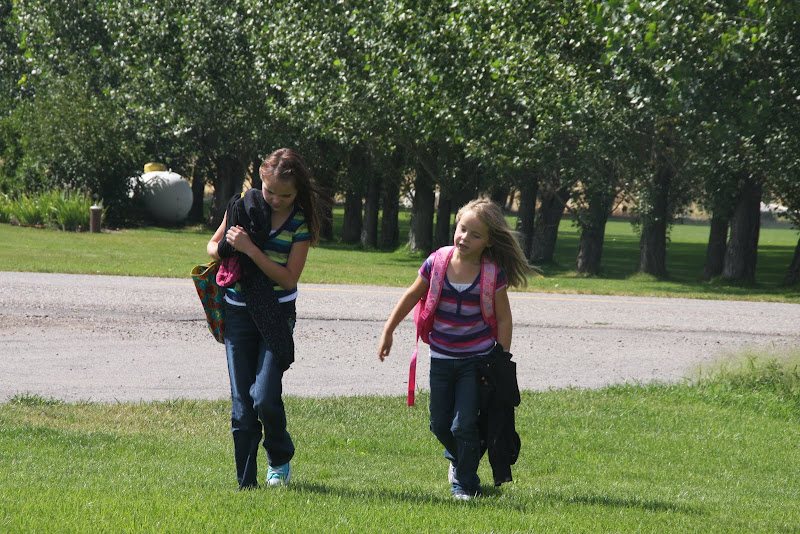 The girls were happy when they got home. They both had homework and plenty of papers for me to read. I think I am ready for this again. It's nice to have a schedule. I'm already planning the pre-school I am going to do with Cruz and Katanya this year. Now everything would be great if it could stay good weather for a lot longer than usual.
Posted by amy k at 9:10 PM 5 comments:

Labels: saved by the bell

Last weekend we went down to Utah. Betsy was going down for the next week so we caravaned with her. We also stopped and visited with Erika and her new "very sweet" baby. Victor is a content baby. I wish I would have snapped some pictures but I didn't. Hopefully when we are down in a couple weeks I will be able to do that. Back to visiting, we got a chance to relax and talk with Erika, Felipe, Hannah, and Maddy. I really miss seeing everyone and want to keep in touch more often. I was sad when we had to leave so soon because our schedule was jammed pack with events. 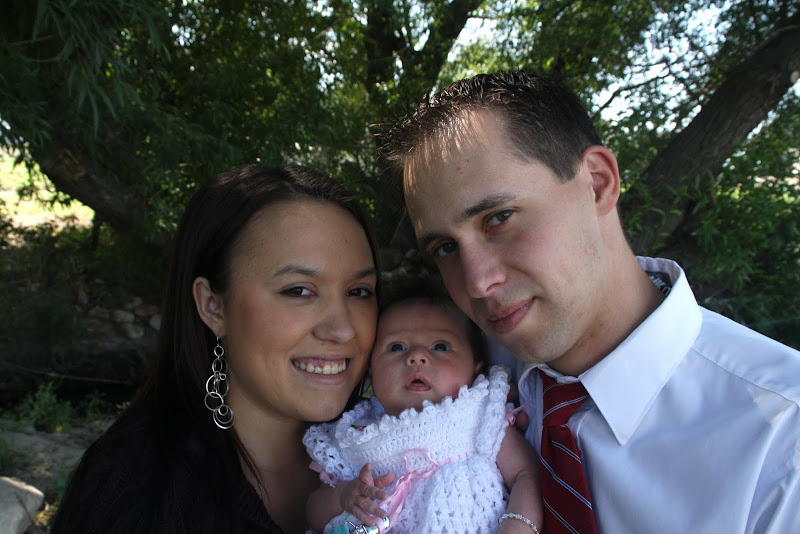 My brother blessed his baby on Sunday. He is a new proud daddy. This little girl has him wrapped around her finger so tight. Olivia is now a month old and 7 1/2 pounds. 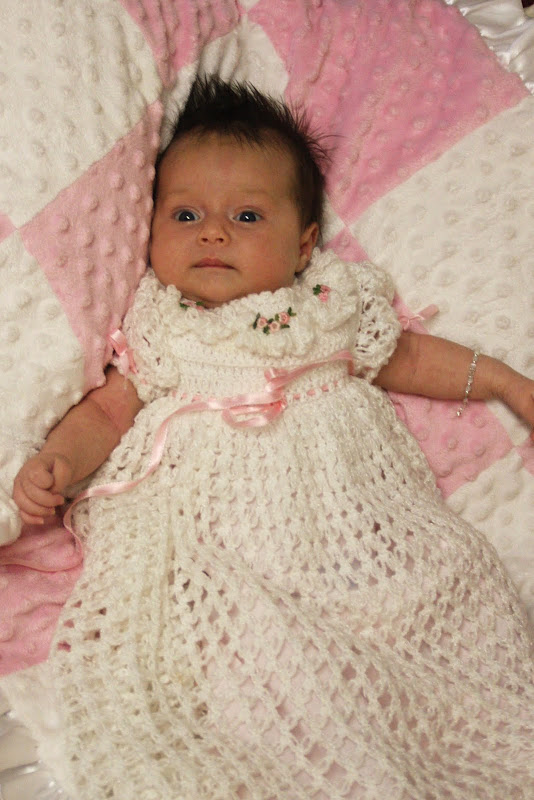 As McKay was holding her on Sunday she looked over and said, "Mom, just one more.....pleasssssee?" I don't think she is ever going to give up.
Posted by amy k at 11:34 PM 1 comment: 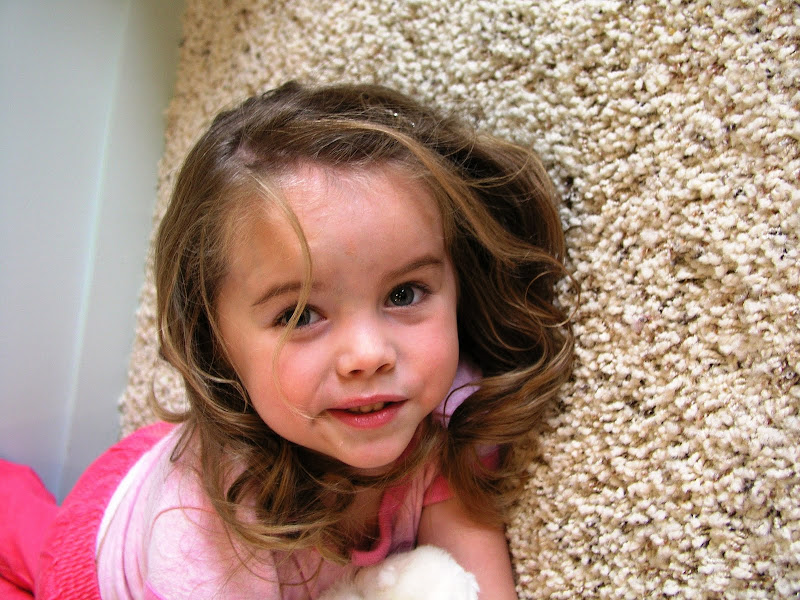 This is Kirsten three years ago, when she was four. 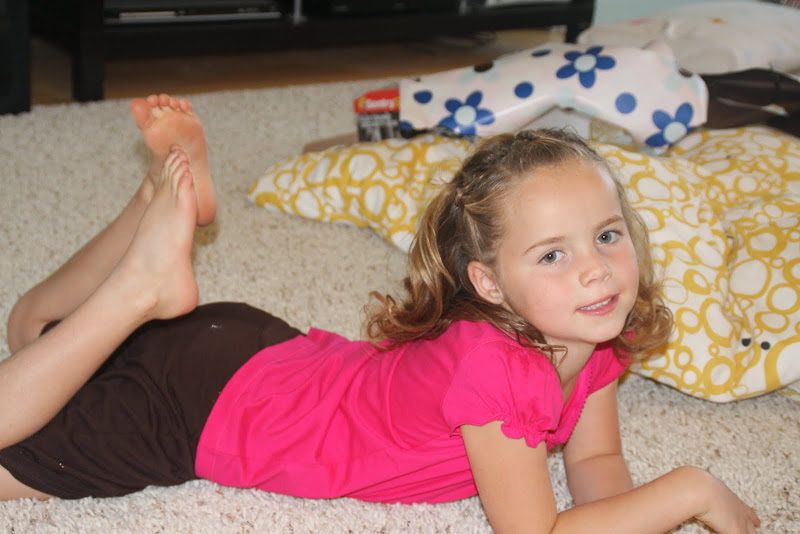 This is Kirsten today, seven years old. She still looks the same but she is bigger and has more sass and attitude. 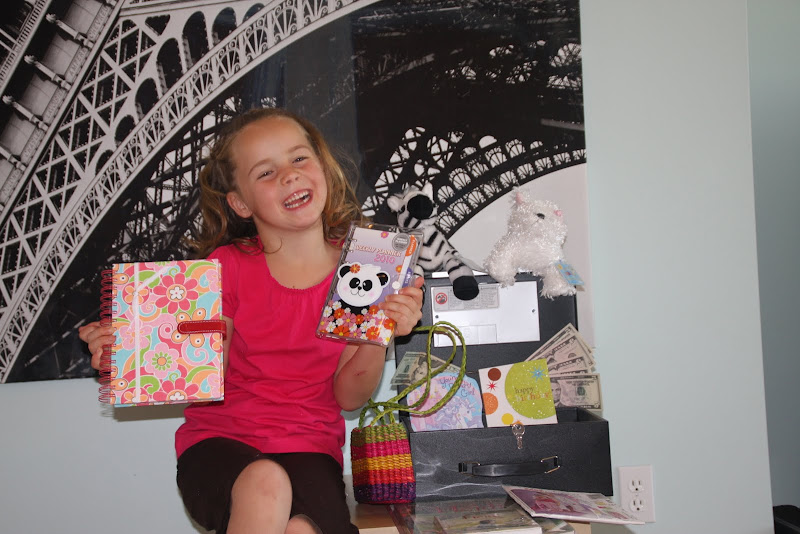 Shopping for her this year was harder than shopping for Jake. If that is possible? Kirsten wanted simple things for her birthday. A diary with a lock and a Webkinz. Simple enough right? We also knew a few other things that she had mentioned wanting the past couple months, like a bathrobe, that we thought we would get her as well.. 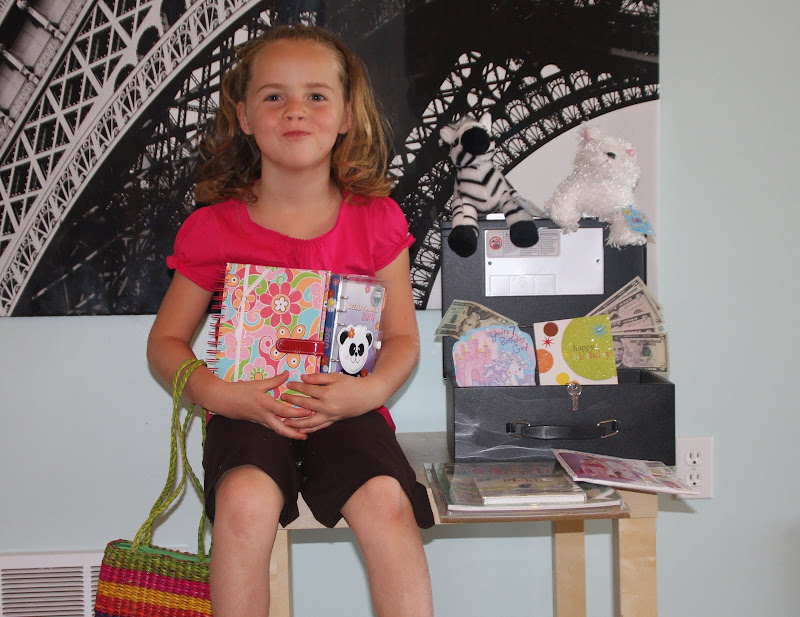 Yesterday I shopped for six hours looking for these things. All I found was a small toy diary that looked like it would break the first time you tried to unlock it, and no bathrobe. I guess bathrobes are Christmas items from what everyone told me. I went to every single clothing store in Idaho Falls looking for one. As I was in Wal-Mart picking up a few things for her "pie" that she wanted, I ran into a neighbor. I was telling her my dilemma when she suggested since you can't lock the journal, why not get her something she can put it in that locks. That's when the light went on. (If you haven't noticed by now that I lack the creative genes.) We got her a lock box for her journal, money and whatever she wants to put in there. It has a set of keys and also an electronic code. She loved it. As for the bathrobe, I actually came up with the idea of making her one and letting her pick out the fabric. So I found a pattern and that took care of that. Kirsten was thrilled with her presents. 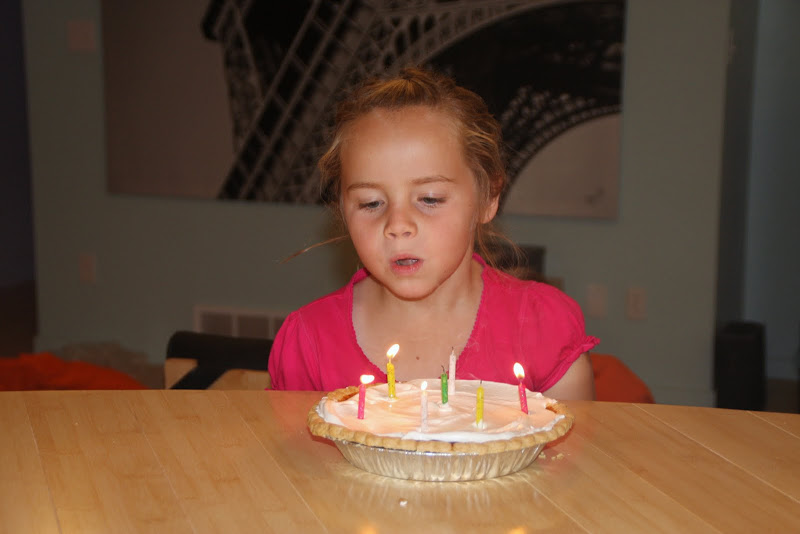 Kirsten also wanted a pumpkin pie for her birthday cake. It was as easy as.... 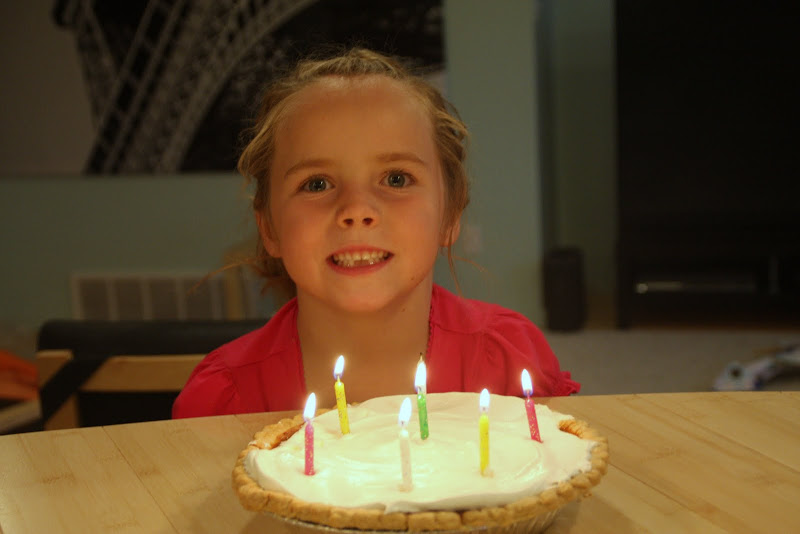 We love you Kirsten!

Today we went to Lava Hot Springs. We've only been one other time as a family at that was with Betsy (again) in 2003. 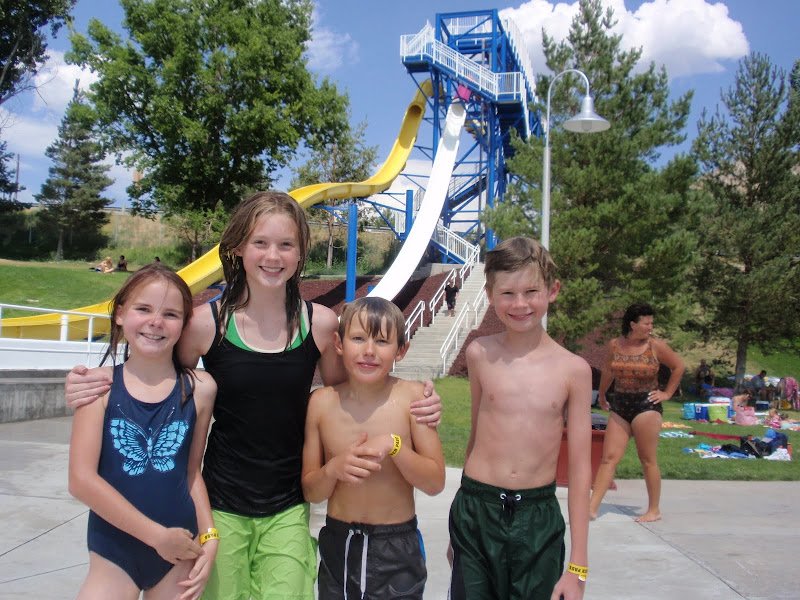 All the kids enjoyed the old slides (that were they last time), plus the new slides that they have recently added. 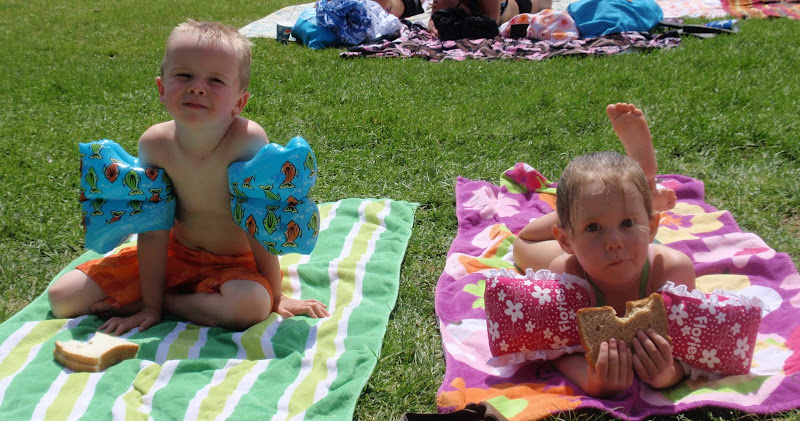 We packed lunch and a lot of snacks that I think we could have stayed there for a full 24 hours and been fine. Food always keeps the kids happy. 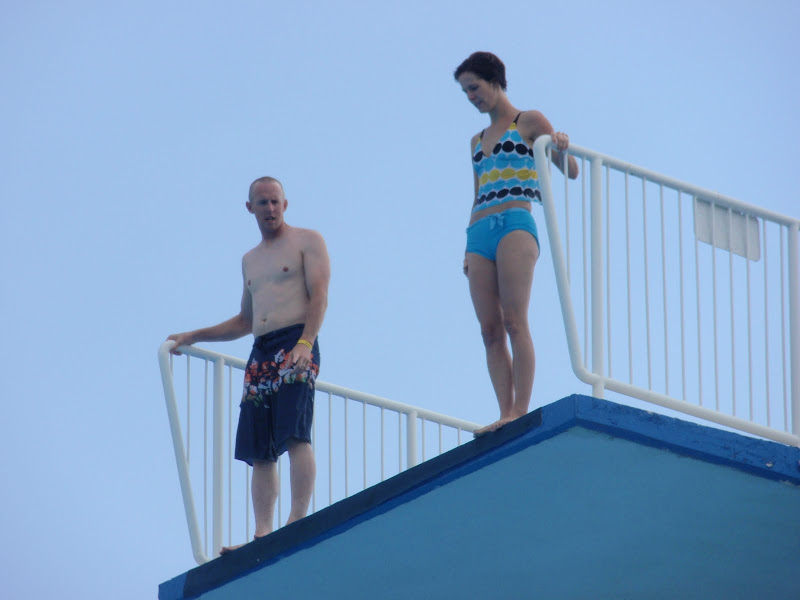 And like last time, we attempted the top platform (10 meters).... 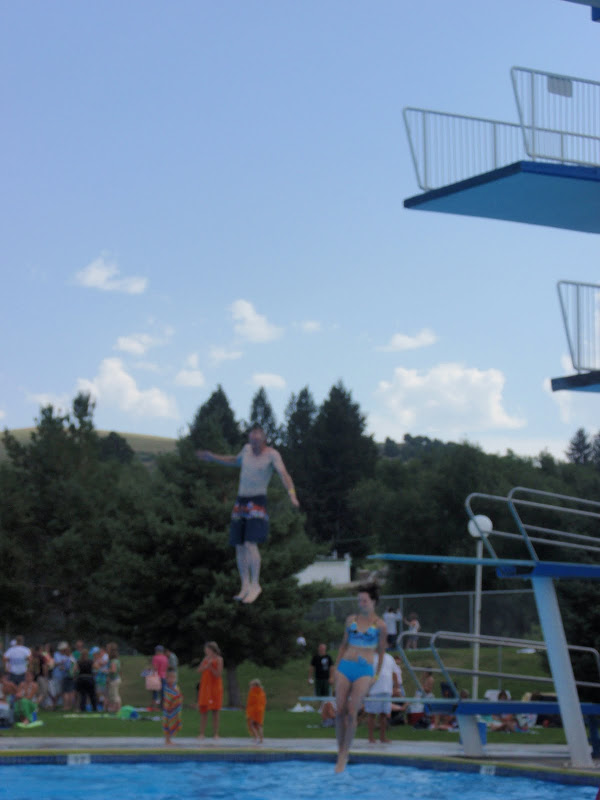 While I was gone to Texas, Jake would wear a shirt to school (or church) and leave it in a laundry basket. When I came come he informed me that he would continue doing this until he was out of shirts and then send them out to be laundered and pressed. I quickly counted up the shirts and did the math in my head and realized that I better invest in a good iron, board, and have Betsy teach me how to "quality" iron to meet Jake's expectations.

After working on these for 10 days straight I finally finished. (Three of them ironed twice because he wore them before I was done.)

How many shirts? 55. At least one of every color. I am positive that Jake has more clothes than I do. My next ironing project, his slacks. 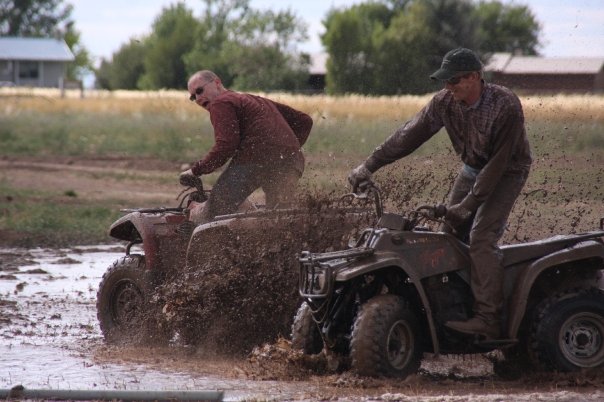 Nate surprised Betsy this weekend and flew up to spend it with his family. I'm sure you can imagine by this picture how much fun was had. As Nate got ready to leave Sunday morning, Cruz came to him and said, "Nate, I want you to stay longer." Nate told him, "I can't. I have to go to work tomorrow."

Cruz's response was, "My dad has work and he quits when he wants too."

Yes, we finally made it back to Idaho. It's taken me a couple days to get back with it and realize what goes where in my own house. So while we enjoyed a week and I haven't posted anything about it (highlights will come later this week) we have been enjoying the nice cool Idaho weather. 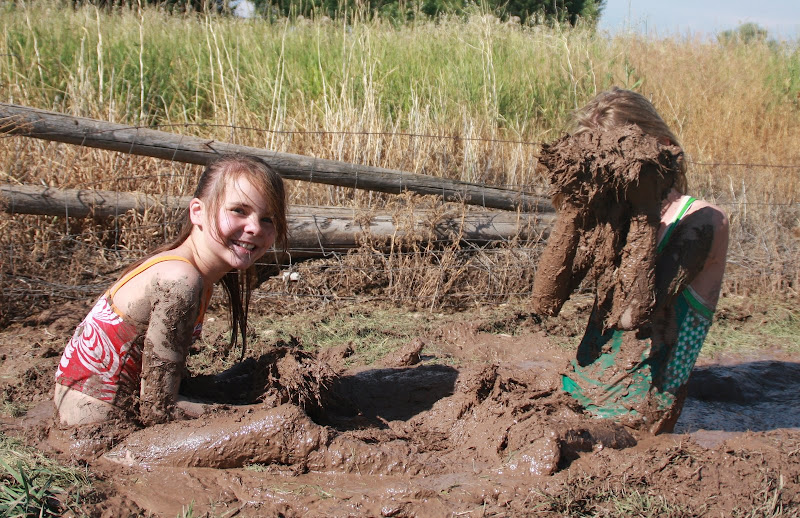 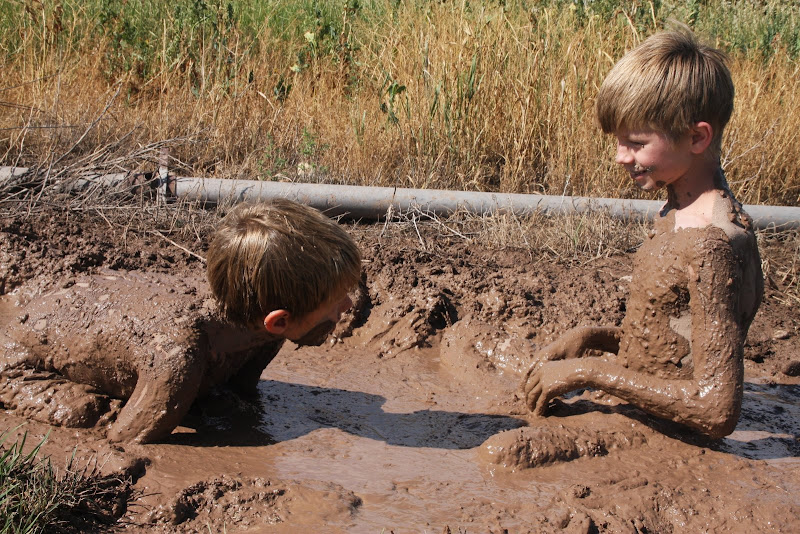 The did this last year, but I think they forgot one thing.... 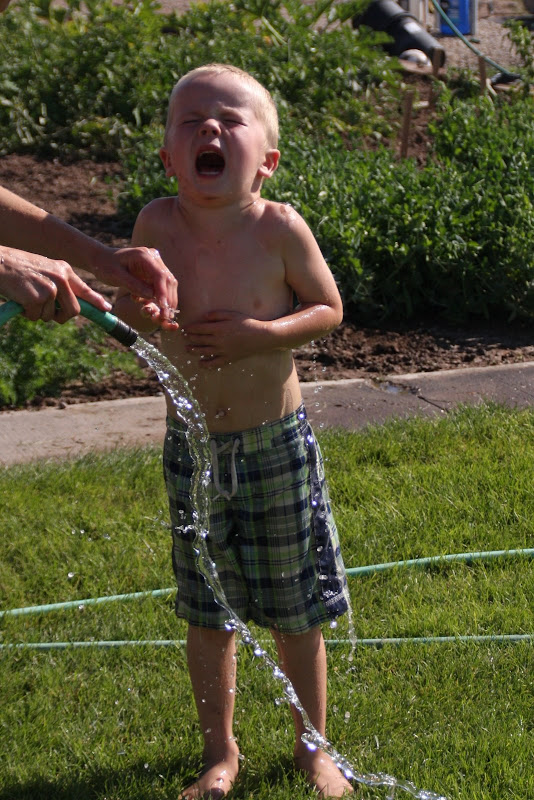 ....How cold it is when you get off after with well water. Cruz wasn't the only one that screamed. All five of the older kids did. 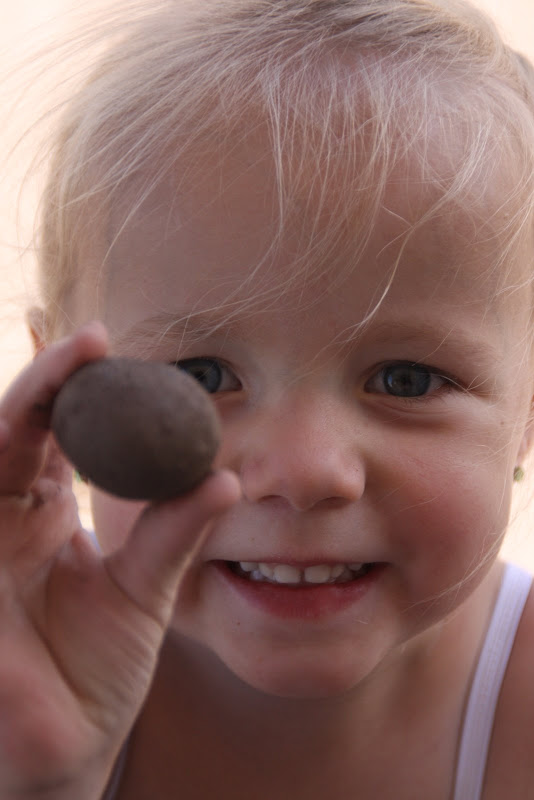 The littler kids played on the safe side and made mud balls.
Posted by amy k at 11:58 PM 2 comments: